The Boston blueblood with a bohemian secret. The penniless punk-rock street performer who dreams of becoming a classically trained musician. The underprivileged up-and-coming fashion designer who spends every night working her day job. The political science student who is beginning to show more promise than anyone – especially himself – ever realized. The once-popular painter who rediscovers the rich palette of experiences that life has to offer. And the stuffy old historian who receives an unexpected blast of fresh air.

Where would such an uncommon assortment of strangers ever even meet, no less fall inconceivably, irrevocably in love? Why, Boston Common of course!

But can true love transcend the challenges that arise from the intersection of extreme wealth, desperate poverty, suppressed snobbery, and relentless schoolwork? A gorgeous bully and a scathing sex scandal don’t make things much easier for this motley crew…

And yet, it’s undeniable.

Paige Turner (or ‘Pah-hee-na, as she would rather be called) isn’t your typical Poor Little Rich Girl. She couldn’t care less about clothing. Parties make her sick – literally. And if an eligible bachelor so much as slips an arm across her shoulders, she can’t help screaming bloody blue murder before running a mile.

Because that’s what she is, see… A Runner.

When the going gets rough, she goes and gets overwhelmed; her mind shuts down and she can’t think straight. Or at all, really. And that’s when the dreaded feeling comes over her – the tingling in her spine, the blood pounding in her ears, the hammering of her heart as it crashes against the wall of her chest. And it’s like she’ll die if she doesn’t just get the hell away from it all.

But when her hearty-partying sister is found dead on the sidewalk outside The Gramercy Rose Hotel, Pah-hee-na takes ‘getting away’ to a whole new level. Instead of just shying away from her resulting stress and sadness, she runs away. Far, far away. Pah-hee-na Runs…using a pretty sweet set of wheels, that is.

But Running is more likely to land her in Hell (no, no…not that one) than help her catch a murderer…isn’t it?

With the help of a sexy, mysterious stranger, a jumbo-sized jack-of-all-trades, and an apparition (or possibly two), Pah-hee-na Turner is about to find out. And she’s in for the ride of her life. 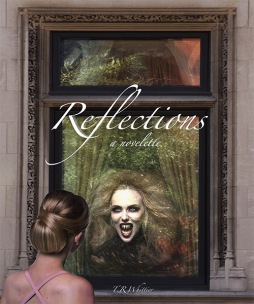 It’s not easy being Olga Dolovich. Orphaned at a time when she had only just begun to appreciate her parents, tormented by her beautiful-but-bitchy sex goddess of a sister, and doomed to clean the world’s dirtiest bathroom, Olga doesn’t exactly lead a charmed life. But worst of all, at least in her tortured mind, is the fact that she’s fat. Too fat for comfort. Too fat for beauty. And much, much too fat to be a ballerina.

But ballet, unfortunately, is what Olga lives and breathes for. What’s a poor, plump, bathroom cleaner with artistic ambitions to do? Under normal circumstances, she’d have no choice but to watch as her dreams got washed down the drain. But when Harold Pinsky, the eccentric heir to a toilet paper fortune, dances into her life, circumstances become anything but normal. Harold, like Olga, has the right kind of talent, but the wrong kind of body to be a professional ballet dancer. Unlike Olga, however, he’s not about to let some stupid societal convention stand in the way of their happiness.

With the help of a few equally imperfect friends, plus one extremely unexpected supporter, they start The Fat Ballet Company – a dance troupe dedicated to breaking down barriers, crushing conventionalism, and squashing stereotypes. But is the world ready for such an enlightened art form? And is Olga ready to come to terms with her less-than-flawless self? FAT BALLET – Dance Without Discrimination!

When an ordinary dollar bill passes through the hands of six strangers, the life of each one takes an extraordinary turn. The psychologically-impoverished heiress, the homeless housewife, the closed-minded artist, the car-hating cab driver, the down-to-earth rising star, and the paternally-challenged stay-at-home dad have nothing in common other than the fact that they are miserable. Their lives are filled with problems, but their heads are void of solutions. It is only after coming in contact with a certain piece of enigmatic currency that they find their way to happiness.
Inspired by the etymology of the phrase “buck passing,” which recounts that an object (known as a “buck”) was passed during early poker games as a means of indicating which player’s turn it was to deal the cards, The Buck Pass is the story of a single dollar bill that acts as an agent of chance and change. Rather than deal the cards, however, the protagonists of The Buck Pass find themselves encouraged to deal inadvertently with their problems – to follow their hearts, leave their mark, and, like the dollar, move on. The Buck Pass – it doesn’t stop here.